In our current world of short attention spans, releasing music more frequently can play a significant factor in your success.

Platforms like Spotify and YouTube reward artists who put out songs and videos on a regular basis. Obviously you can’t (and shouldn’t) bang out a full album every two or three months, so instead: singles!

Whether you’re releasing singles as a means of building towards an EP or LP which includes those same songs or you’re stockpiling tracks and putting out standalone singles as a way of maintaining momentum between bigger projects, you have the opportunity to turn each single into an event…

I recently released a new single and had a blast planning the various elements of the launch.

I can’t say my newest single yielded fame and fortune, but I applied marketing concepts that I’m pretty sure will improve your campaign no matter what the state of your career or size of your fanbase. It’s “scalable” wisdom.

Lots of people messaged me saying they loved various aspects of the launch (and the song, thankfully), and one person even wrote saying “Wow, your whole marketing strategy for this song is dialed in!”

As you’re getting ready to release a new song, I think it’ll help to keep the following concepts in mind too.

The key to promoting your newest single

1. Set a timeline and be patient

Yes, part of the benefit of singles is that they’re low pressure and you can drop them quickly. But don’t be in TOO much of a rush. Plan ahead. Do it right. You won’t be able to launch this song again.

Depending on the scope of your campaign, you might even need three months of preparation.

Here are just some of the things you’ll need time to arrange:

2. Don’t promote until your fans can take action

There’s no point in sharing a picture of your cover artwork a month before the single is available if no one can click to access, save, buy, or share the tune. Before you go crazy trying to create anticipation, set up your pre-saves or pre-orders! Get the link, then share that link when you post updates about the release ahead of its drop date.

3. Find the hook and make everything swirl around it

Everywhere all the time, the world buzzes. It takes a lot to get us to pay attention, so repeated messaging is crucial. And as you’re blasting us with news about your latest single, your message will be amplified when there’s a hook beyond just “new song coming soon.”

What’s the story? The hook? The thing that makes people say “I GOTTA CHECK THIS OUT!?” If you have that, the rest of your promotion will fall into place.

For me, there was a loose connection between the lyrics of my song “Irretrievable Beauty” and Climate Change. A single Public Domain image of an old iceberg stood at the core of my marketing, and it would become the cover artwork, the background of my lyric video, and an important element in more than a dozen Instagram posts. The image was one of the first instances of supernatural photography, purporting to capture an iceberg in 1905 where a crystalline Virgin Mary rose from the water.

The mystery of that image and how it was doctored to propel a hoax all seemed to speak to the song title “Irretrievable Beauty,” as did the very nature of both icebergs and photography. So,… there was the kernel of my marketing. From there it was just a matter of expressing it in soundbites.

You’ve got your hook; now how are you going to cast it into the same waters over and over again without the fish getting bored of that same bobbing lure?

Switch the tone. You can communicate through:

The first thing I did was set up my Spotify pre-save campaign. Once I had the link, I started to slowly tease the cover artwork by splitting it up into nine smaller images for Instagram. When a viewer looked at my profile at the end of the week, all nine of the smaller images formed a grid revealing the full artwork. Every time I posted I would share the pre-save link.

I then shifted to a more direct approach for the pre-save campaign, but with a focus on an emotional appeal… Once the song was released I put out a lyric video (on YouTube and Facebook) with tons of buried text — posing as a letter from the 22nd-Century — referring back to the origins of the photograph, and I placed it inside a Show.co video feature page to drive conversions outside of YouTube: 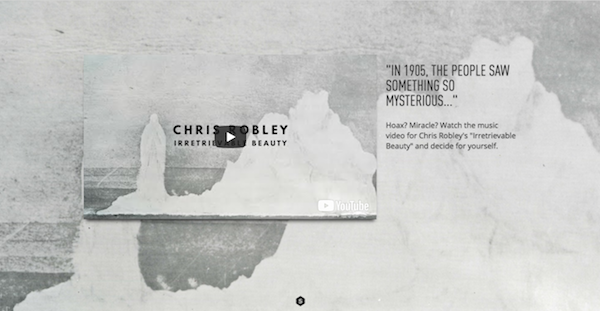 I also repeated that little hook “In 1905, the people saw something so mysterious you might say that it almost wasn’t there…” in a number of ways throughout the campaign: emails, tweets, etc.

Then I did the obvious things, like adding a Spotify player to my website announcement about the song:

The next thing I did was to take a bunch of phrases from the letter portion of the lyric video and place them over the cover art for more Instagram posts, like so…

Lastly, I posted the complete text of the letter on Facebook.

In addition to changing up the tone of the message, it’s important to remember that you have many channels through which to communicate: social, website, email, live shows, etc.

There’s also print and online music media, blog premieres for your song or video, reviews, playlist placements, and more out-of-the-box options such as publicizing your music to any relevant corporations, non-profit organizations, or hobby groups that might resonate with your music or the topic of the song.

5. Get all your ducks in a row before the release

Again, there’s a lot of options for creatively communicating the message that you have a new song out. But it always amazes me how long it takes to compose an email newsletter or write a Facebook post. I think, oh, that’s just a couple minutes, and then suddenly an hour has gone by. For that reason, you’ll want to prepare all assets well ahead of the launch date so you can focus on promotion once the song is out (not worrying about video editing, Photoshop, copy-writing, etc.).

And as I mentioned above, be sure to notify your distributor, publicist, any industry contacts, licensing experts, and so forth, way in advance.

This also means you’ll need to have an easy way to share a private link to your single: SoundCloud, Bandcamp, etc.

6. Consider another angle to entice beyond the primary hook

The song might be enough. The story and hook might be enough. But there could be some casual fans who won’t make the leap and check out your song unless there’s some additional benefit (like a prize, a free t-shirt, etc.).

When I ran my Spotify pre-save campaign, I made it a contest too. I would choose two winners at random from the list of people who pre-saved the song and send them a t-shirt. In addition to sending this out through the usual means, I also ran a Facebook ad to a targeted group of people who like similar artists as me.

Think of what extras might make someone push the save, buy, or play button.

7. Be ready to do the grunt work

We dream of easy solutions — the service that will handle everything for you, the dream manager who will do all the work, the industry contact who holds the keys to your success — but there’s often no substitute for digging in, doing research, writing a trillion emails, bracing for rejection, and building upon the small relative percentage of wins we get.

This applies when you’re doing your own PR, radio promotion, or launching singles. It’s work. Staying up until 3am to promote a single might not be why you got into music, but it’s work that will lead some listeners TO your music — which IS the reason you got into this crazy game in the first place.

Any advice to add? How do you think about releasing singles? Let me know in the comments below.