We’ve all been at a show or played on a bill where a well-intentioned opening band has taken liberties.

Maybe they had a few too many comped drinks before their set; maybe they just got caught up in the moment. But one thing’s for sure: when their allotted time was up and a lone fan (or more likely, friend) yelled out “ONE MORE!,” they were happy to oblige, even though they’d already said it was their last song and it meant they’d be running into the next band’s slot.

This is not a great move.

Audience members who are there to see the headliner and are just happening to catch your set can quickly go from “Hey, this is pretty good – I might pick up a CD” within the first five songs to “Dear god, get these egomaniacs off the stage” by the fifteenth.

And you can bet your fellow bands on the bill are checking their watches, quietly seething about how you just ignored the two clicks of the flashlight from the sound person. Not a solid way to make friends. When planning what bands you want to share a bill with, I’ve never heard someone say, “Hey, we should ask that band that made it clear they were more important than everyone else, played too long, and cleared out the room before we hit the stage. They were a cool group.”

If you’re headlining and the crowd is cheering for encores, hey: more power to you. If you’re in an opening spot, you’re better off playing a set that’s too short than one that’s too long.

Did you not get to some of your songs because of time constraints? Tell the crowd there’s a bunch of tracks you didn’t play tonight on your CD/vinyl available at the merch table. Or reiterate your band name and tell ‘em to follow you on Spotify to hear more. If people have it on their phone, they can do it instantly.

Did your drunk pals yell for an encore?

Some of the best sets I’ve ever seen were from opening bands who made the most of their limited time: they kept the banter to a minimum, played a tight, short set, and left me wanting to hear more. This leads to good impressions, positive memories, and, ideally, new fans and more merch sales.

What are your thoughts on this? Ever had any experiences with artists who didn’t know when to say when? Let us know in the comments! 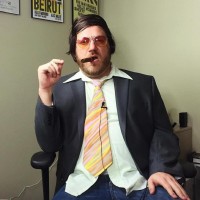 3 things every musician should remember, no matter where you are in your career
Previous

How to make a legit music video: advice from Wons Phreely
Next