No crowd, no crowdfunding

[This article is an excerpt from Ariel Hyatt’s Crowdstart.]

In one of my favorite movies, Old School, Frank the Tank (played by Will Ferrell) gets drunk at a frat party, takes off all his clothes and yells, “Okay everybody, we’re going streaking! Come on!” He takes off running down the street — but nobody follows him. He ends up jogging, buck naked, through town, still yelling, “We’re going streaking!” oblivious to the fact that he’s completely alone.

Unless you want to end up like Frank the Tank, before you declare, “I’m launching a crowdfunding campaign!” you’d better make sure you have a crowd that is willing to follow your lead and give you their support.

That means you need to: (1) build a solid base of followers, and then (2) engage them on a regular basis.

Amanda Palmer is the rock star of crowdfunding because she got those two things right. This woman knows how to make an emotional connection with her fans. This is part of her signature story — her deeply personal connections that she makes. Her TED Talk expresses this fully, and I highly suggest you watch it, as it will set the tone for you for building your own crowd:

How does Amanda connect with her crowd? Simple.

She STAYS at the venue after each and every show signing every piece of merchandise and scrap of paper put in front of her.

She STAYS until she has personally touched every last fan.

Then she STAYS in touch with them long after she has left their town with her newsletter, her blog, and on her socials.

She utilizes what I call the 3 C’s (CCC): consistent, compelling content.

She tells stories, invites her fans to join her everywhere, and she asks questions. She creates and nurtures relationships.

She understands the rules of engagement, and it’s not magic — it simply takes consistency. As a result, she has built a huge email list and her socials are active.

It was this “crowd” that supported her epic Kickstarter campaign, which was created to help fund her Amanda Palmer and The Grand Theft Orchestra’s new album. She wanted to raise enough money to mix, manufacture, distribute, promote, and plan a tour for the album.

Her aim was to raise $100,000 in 31 days. Amazingly, she reached that goal (and beyond) just seven hours after the project was posted. The final result at the end of a month? Amanda raised $1,192,793 for her album from almost 25,000 backers. It was the first time a musician had raised over $1 million through crowdfunding.

But it wasn’t just Amanda’s success — it was her crowds. As the editor of the Techdirt blog, Mike Masnik, said, “This was never just about Amanda. This (and many, many other projects by creators who connect with their audience) are about involving the fans and making them a part of the experiment… the success of the campaign was a success for the fans as well.”

A few years ago, a much more famous singer tried a Kickstarter campaign and fell flat. Icelandic singer Björk tried to raise money for an app, Biophilia, based on her album of the same name. Her goal was 375,000 British pounds in 30 days, but when she had raised only 15,500 pounds after 10 days, she closed the campaign down.

Why did Björk’s campaign underperform? It’s because at the time of her crowdfunding campaign launch, she had almost never engaged with her audience; in the year leading up to her crowdfunding campaign, she sent exactly three tweets. Even to this day, she still rarely posts. To date, Björk has posted a little over 1,000 tweets (while Amanda Palmer has posted 75,000 tweets in the same time period). Björk’s community is just not used to interacting and communicating with her and her crowdfunding campaign. In 2015, Björk had a highly celebrated release and a sold-out show at MOMA, and this type of marketing approach is much more in alignment with Bjork’s iconic brand.

The moral? Do not attempt to crowdfund until you have an engaged audience that you can measure, and you have a clear plan for keeping that audience engaged before, during, and after your campaign.

The good news is that it is easier than you might think to build and engage your crowd. In Crowdstart, you will find some effective strategies to grow one. We’ll talk about creating and keeping an engaged online fan base using the channels of your choice starting with your website, and expanding onto social media, visual platforms like YouTube, Instagram and Pinterest, and great content delivered through blogs, podcasts, or newsletters. You should have these in place before you start your crowdfunding campaign.

A word of warning: it takes effort to build and maintain an online presence, and you can’t neglect your crowd once you have taken the time and trouble to gather them. Your emotional connection with your crowd is essential. That’s why it is crucial to stay engaged with your community, both online and in real life. 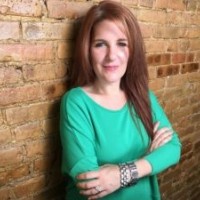 Ariel Hyatt Has been a fierce entrepreneur for 20 years. She runs Cyber PR, a dynamic social media & content strategy company based in New York City. Her agency places artists on blogs & podcasts, establishes their online brands, and helps them build their fan bases. She has spoken in 12 countries and is the author of four books on social media for musicians, including Music Success in 9 Weeks, which hit number one on Amazon. Her newest book Crowdstart is available now from Amazon, or from her site with a ton of amazing bonuses!

Pandora's new promotion tools for musicians are a no-brainer: use them!
Next