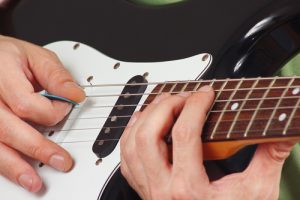 [This post was written by guest contributor Anthony Ceseri.]

The best things in life typically happen when you get a little outside your comfort zone. Think about when you’ve done it. Maybe it was asking out someone you liked, or starting your own business.

The same applies to your songwriting. Maybe the idea of getting your songs heard or critiqued scares you. Or maybe you hate the thought of playing in front of a crowd. If you know that doing something can potentially lead you on a path to success and the only reason you’re not doing it is you’re afraid or anxious about it, you’re cheating yourself.

Start taking the steps you know are necessary. You can start small and build on them. For example, if you fear performing in public, you can start with an open mic where you’d only have to play one song. Or maybe start by playing a song or two for a couple of friends. If it makes you feel anxious but you know it’ll be good for you, do it. You’ll slowly start expanding the limits of your comfort zone, and start to grow confidence as a result.

Making decisions from the future

Sometimes your fear can impair your judgment. You might let your fear get in your head and convince you to not do something. You’ll even rationalize it to yourself so you don’t have to do it. If you fear rejection, you might say something like “I’m not going to pitch this song to a music supervisor, because it’s probably not the type of song they’re looking for anyway.” If you’ve ever told yourself something like that, you’re allowing yourself to use an excuse as a way of rationalizing your fear.

Times like these are when you can make a decision from your future. It sounds crazy, but what I like to do when I find myself in a situation like the one just described is to ask myself “If it were five years from now, would I have wished I would have done this now?” If the answer is yes, you’re probably telling yourself an excuse because you’re scared. It’s an excuse that can be holding you back.

This is a good way to pull yourself outside of the situation to get away from the emotions that may be blocking your judgment. You’ll then be able to make a better decision about the right thing to do to better yourself.

Another thing songwriters fear is making decisions quickly, because they don’t want to make the wrong choice. The problem is, successful people make quick decisions. They don’t wait around and ponder things for months, worrying if they’re making the right choice. They decide, and if they end up making the wrong choice they process the information and use it as a knowledge base for a future decision. They learn from their mistakes, and turn them into advantages. It helps make them wise.

Let’s look at two scenarios, as an example:

Now it’s time for him to write a melody for the song. He has three ideas for how the melody can go, but he’s not sure which one to use. He puts the song away for another week, hoping the answer will come to him. Again, unable to decide between the three melody ideas, he crams all three of them into the song, so he doesn’t have to pick only one.

Three months later the song is done. He’s not even sure if he likes it. Maybe it’s because there are too many things happening for one song.

He has a few melody ideas. He picks the first one he came up with. He listens back to it the next day after having a little distance from the song, and realizes the second one is the strongest. He changes it and doesn’t revisit the melody any more. He knows the current one is strong.

A week later the song is finished. He gets some feedback on it. Some musician friends he trusts made good suggestions on things that can be improved. They gave him ideas he could even use for future songs, not just this one. He decides to leave his current song as is, and use the newfound ideas as he writes his next song. A week later that next song is done too.

By looking at these two scenarios, Songwriter B is way more likely to succeed with his approach. He makes decisions quickly, which allows him to get more information, do more work, learn more and move forward. Songwriter A is indecisive and as a result, lazy. He’s not getting much done, so he’s not learning from what he’s doing.

Get into the habit of making quick decisions. Do something. Don’t just ponder forever and never take action. You want there to be thought behind the moves you make in your songs, but make the decisions for those moves and then move forward and make more decisions. The difference between those who become successful and those who don’t is a simple willingness or reluctance to act and be decisive.

Hopefully now you have a couple of easy-to-implement strategies for getting out of your comfort zone and becoming a more successful songwriter. Good luck as you move forward!

By the way, for a free EBook with a lot of quick and easy tips for writing better songs and becoming a more well-rounded songwriter, click here: http://successforyoursongs.com/freeoffer/