On our release day, our album Perfect Strangers was featured on the iTunes new jazz releases section at #31. After a few whoops of joy, we asked ourselves: how can we use this “headline moment” to do even better? Here’s how we used this one newsworthy data point to drive more success.

From data to story

Thirty-one is a great number. But our first thought was: How about the top 20? Top 10? Could we do it? So after a few minutes of celebrating our success, we immediately got to work. We took a screenshot and promoted it on our social platforms. “Our unknown band was somehow featured among the greats. Can you help us get higher on the charts?” With a few friends buying the album, we got to #22 on our first day in the stores. A feature like this can create buzz. Could we amplify this further?

Whenever you have a win, try to think of other angles to position yourself as someone successful who needs just a little push from your fans to get to the next level.

Who you are as an artist

Our passion is to make music while also inspiring and empowering others to do so. We often partner with non-profits that fund music programs or otherwise support music education. We want to be successful, but we also want to leave the music community a little stronger than we found it 🙂

If you get lucky with a headline moment, you can drive even more out of the opportunity by promoting it differently to different people.

You can give strangers a reason to care by aligning your goals with something they already care about.

It can be another artist, or a cause. Given our overarching goal, we pledged to donate our first week of sales to Hungry For Music (HFM) in return for tapping into their network.

If people don’t know how much of their $9.99 will go to your charity, they won’t buy. Be explicit.

During our HFM campaign, we went to HFM’s website and reframed their content for our audience. Instead of saying “$30 buys and ships a flute”, we said “5 albums”. We then used specific instruments to target our musician audience each day. If you’re a band teacher, an ad saying “For every 143 albums sold, HFM can send 20 instruments to an after-school program” is more likely to resonate with you than one saying “for every $1000.”

People who support a cause want to have impact, so they won’t invest in your cause if they think your goals are unattainable, resulting in no impact.

Our numbers were all relatively small, starting at 5 albums. If someone is moved enough to buy one, it’s likely 4 others also would. A real child will get a flute to learn music. Relating exact numbers of albums sold to very concrete outcomes was a good way to make the impact tangible and attainable.

Learn from your mistakes

In our excitement, we sent out a blast email to our entire 1500-subscriber mailing list. Bad move. Previously, we had only sent very customized emails to small groups and our open rate was 3x the industry average. Sending the generic blast meant the message had to be watered down to appeal to everybody. As a result, people were less engaged and we lost about 40 subscribers. We now know what works and doesn’t.

We all want to get to the top, but it helps to get there in baby steps with your audience. After starting at #31 on the best-sellers list, we wanted to get to the top 10. However, we didn’t publicly set out to reach #10 right away. Incremental successes instead of one lofty goal (all-or-nothing) reduces risk and builds momentum.

We promoted our #31 debut with a screenshot and asked our fanbase if they’d be so kind as to help us move up the charts. We made it to the Top 20 and then we started another push to get in the Top 10. All along the way, the fans were not only rooting for us but feeling like part of the story.

Our story was moving forward, we were the underdog inching towards the climax. Would this protagonist reach the goal or not? As we built on each small win, our momentum increased. At any point, we could have missed the next milestone and would still have the aggregated successes cemented in our story.

When we did reach #10 on the iTunes new jazz releases best-sellers list, we built that, too. We got our publicist to pitch our success story to people who might be inspired from it. That’s how we got to write this blog for you! 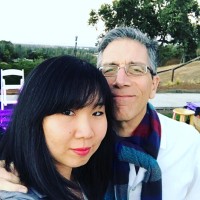 23rd Hour is a jazz-influenced singer-songwriter duet from Silicon Valley, composed of George Paolini & Sherry-Lynn Lee. Sherry co-founded a start-up and currently works in tech in Silicon Valley. George is a former executive and has worked at or consulted for numerous start-ups in the Bay Area. Their album “Perfect Strangers” is now available on all platforms (thanks to CD Baby!), including for free streaming on their website: www.23rdhr.com.